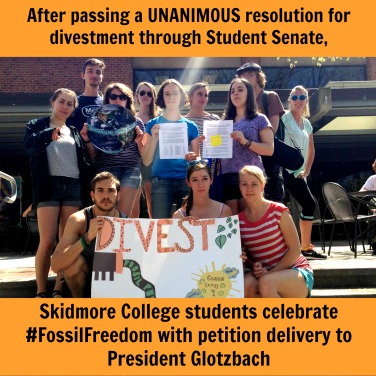 The Environmental Action Club(EAC) at Skidmore College has always been a hotbed for activism and change at the school, a gathering place for the most committed students. For the past 2 years students involved with the Environmental Action Club have tried to shrink Skidmore’s carbon footprint. Several efforts were made to get the President of the College to sign a Campus Climate Commitment that would do just that, reduce the schools carbon footprint. After nearly a year of meeting after meeting no agreement was reached as the administration perceived the goals to be unrealistic.

With the establishment of a new Student Government Association(SGA) Sustainability Committee(SuCo) the political climate at Skidmore changed. For the last year EAC and SuCo have created a strong student alliance to institutionalize Skidmore College. This semester students have used this alliance to push for divestment at Skidmore.

After initial efforts to call on the school’s Chief Financial Officer to begin the divestment process were rebuffed, students got political. A joint group of students from EAC and SuCo drafted a divestment resolution in hopes that the Student Government Association would adopt it. After a long revision process, and a petition with over 500 signatures, the resolution was passed unanimously on Tuesday, April 30th.

There is of course at least one example, the divestment from companies involved in the South African Apartheid regime. Skidmore students discovered the use of South African mined steel in one of the academic buildings on campus and began a divestment campaign that is now enshrined on a plaque in the aforementioned building.

Many people, including the administration at Skidmore College, find the goal of divestment to be unrealistic or lofty- but not the students. On May 2nd, a group of student activists delivered the divestment petition containing over 500 signatures to the President Glotzbach’s office, sending a clear message to the administration that students will see divestment through to the end. As a part of the ever-growing national divestment movement there is a growing sense on the Skidmore campus that anything is possible.